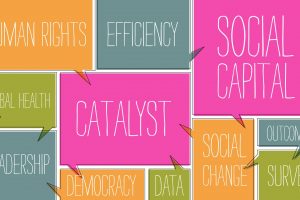 Neatly packaging the concept of ‘social value’ is no mean feat. It can feel like a moving feast, satisfying the greedy appetite of anyone who wants to label something as acting for ‘the social good’, having an ‘impact’ or being ‘value-for-money’. So flaky around the edges is the idea of social value in general use that it can almost always be made to fit whatever message someone wants to get across. This is problematic. The power of what social value can really mean, in terms of the important things that people should be working together to create, and account for, is often diluted.

Social value in its proper sense should include that which traditional financial accounting systems ignore – things that are equally, or far more, important than those with a readily available price tag. If matters such as community belonging, self-esteem and progression do not get counted, neither do they get talked about. If they are not at the centre of things when we are designing how people live and interact with their environment, they will remain the dreams of a limited number of visionaries, while the majority ploughs ahead ‘business as usual’.

The global recession clearly showed that our current systems are geared in the wrong direction. However, the language of value is still being used to articulate arguments with very narrow interests. This is perpetuating inequality and injustice – and indeed often worsening it – at local, national and global scales.

Amnesty International recently produced a report about children in the Democratic Republic of Congo being exploited in the mining of cobalt used in the production of lithium batteries – those same batteries we are using in our smart phones and cars. The report cites children as young as seven working in life threatening conditions for $2 and less a day. The household name companies involved clarified the efforts they say they are making to address these issues. For consumers at the far end of the chain, becoming more aware of the price fellow humans are paying in order to facilitate our gadgetry obsession brings home the dilemmas we all face in being part of the modern world. Not all activities create value; many in fact destroy value. We may live in the ‘global village’, but we are not all benefiting from it equally.

Why is there such a reluctance to account properly for social value? We already have much of the knowledge and we also have many of the tools, but the will seems to be lacking. Even when we do attempt to measure social value, we often do it for the wrong reasons (for instance, just because a funder forced us to) or we do it badly. Organisations are getting slightly better at moving beyond outputs (numbers of people who attended, were trained, etc) to outcomes (in other words, what changed as a result of the activities). But their understanding of impact and value is far hazier.

Why is there such a reluctance to account properly for social value?

More people are beginning to report on their ‘impact’, but new problems are emerging. Claiming change without including appropriate evidence, and measuring without using a robust methodology, are issues of growing concern. There are increasing numbers of impact reports in the public domain that lack validity. The credibility of social value measurement is under threat. As a consequence, and even more significantly, the credibility of social change initiatives is in danger, which is a particular challenge for the community and voluntary sector, which often delivers these interventions and is mostly reliant on external financial support to do so. The general public, funders and other social investors need to be able to trust the basis upon which we make impact claims, else we are doomed.

So how do we bridge the credibility gap? It is all about providing a complete and transparent picture in line with the seven social value principles. When describing the results of a given activity, we need to explain what the key changes were and for whom. Additionally we need to clearly describe the data upon which any claims and subsequent monetary valuations (if used) are based. We need to show how stakeholders were engaged and that there is a causal sequence of events that led to the outcomes being claimed. It is also important to provide a convincing estimate of what change would have occurred anyway without the intervention, to what extent the intervention contributed to the change, how much of the change is in fact attributable to other services or stakeholders, and how long the change is likely to last for. There must be an acceptance that not all change is positive and there must be no over-claiming.

A focus on social value is of immense benefit to organisations, both in terms of their internal workings and in terms of their relations with the outside world. Those that dip their toe into these waters for the first time can do so slowly and gradually increase their adherence to the seven principles of social value. However, when making public claims about the social value that they have created, a higher level of rigour is needed. This should include a verification of their reporting, not only by their own stakeholders, but also by those qualified to make a judgement call on quality, such as peer reviewers for academic reports and the assurance panel of Social Value UK for practice-based reports.

Funders and commissioners are encouraged to engage with organisations that have or use accredited practitioners of social value, for these individuals can demonstrate compliance with internationally accepted standards for impact reporting. This community of people working in different countries and across a diverse range of disciplines, is keen to grow in number and be joined by further accredited practitioners.

We suspect that what counts and how it should be counted will remain a matter of ongoing debate. As the only three accredited practitioners currently practising in Ireland, we want to invite others to join us on a journey to high social value. Please contact us to continue the conversation:

Caroline Gardner is the manager Quality Matters. Caroline has a particular interest in improving outcomes for clients through smart information systems and interagency working.
LinkedIn